Research, Pedagogy, and Engagement for a World on the Move

With support from the Mellon Foundation Just Futures Initiative and Global Cornell, the Migrations initiative is funding research and engagement that centers the connections between racism, dispossession, and migration in interdisciplinary, innovative, and impactful ways.

Stay tuned for more information about our next cycle of Migrations grants. 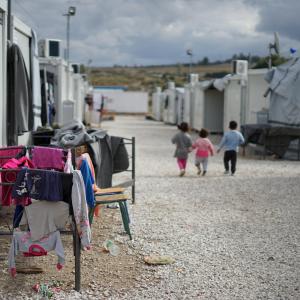 Read more about our newly awarded grants, funding research and engagement on race, dispossession, and migration in four categories:

Slavery, colonization, Indigenous dispossession, and war have driven migration and other patterns of racial violence, urban segregation, and health disparities. Our partnership with the Mellon Just Futures Initiative supports us as we prioritize the study of these topics. In 2021 and beyond, we are using this support to fund teams that bring together expertise from multiple disciplines, temporal periods, and geographic scales to analyze the many intersections and implications of racism, dispossession, and migration.

The United States and many other contexts across the globe are based on structures of white supremacy.  Structural racism becomes institutionalized in our everyday lives, going far beyond individual prejudice or even implicit bias. Therefore, racialized stereotypes of migrants must be understood in relationship to anti-blackness and the displacement of native communities. This political and cultural landscape drives the militarization of borders, the concretizing of the police state, and whether and how migrant rights are allowed and respected. How societies remember and recognize previous acts of colonizers, and the flows of enslaved peoples and indigenous populations they kidnapped and displaced, are significant to national and global discussions of the rights of both migrants and other marginalized groups. These erasures are also reflected in underrepresentation in university spaces but also become vibrant platforms for social movements and demands for racial justice.

Dispossession—the loss of land, rights, or resources and a driver of inequality—can shape well-being for centuries. Continuous extraction, forced labor, racial violence, and alienation are outgrowths of colonization and hallmarks of so-called “development” projects. Ongoing “accumulation by dispossession” actively continues in housing evictions, deportations, and imprisonment reflect deep racial inequalities. Land Grant universities like Cornell have been complicit in the Plantationocene, both through the displacement of native peoples and the propagation of large-scale commodity agriculture. We call on the land grant mission of the university to actively work towards redress: understanding and correcting the multi-faceted nature and effects of dispossession.

Migration must be understood as rooted in histories of dispossession and racism.  Despite university calls for inclusion, there is insufficient access to university admissions, employment, and leadership for migrant scholars and workers. Together these projects will build on the deep expertise on the Cornell campus to co-create a research, teaching, and engagement agenda that works across borders (political, cultural, geographic, temporal) and across communities (students, scholars, civil society, government, native communities, undocumented workers, people of color, refugees).  In doing so, funded projects will challenge strategies of othering; and expose structures of enduring dispossession/inequalities to build new cultural imaginaries rooted in antiracial and anticolonial justice.

Through these lenses, this round of funding will support work in the following core arenas of the current political moment.

There is a range of regulatory institutions and social hierarchies that shape migrations. National governments are the world’s primary apparatus for regulating migration, reifying new ethno-racial categories, or eradicating them from public discourse. Supra-national and regional institutions also police migrant flows and regulate migrant life. While much of the focus has been on urban migrant destinations, often invisible migrant communities labor in dairies and orchards and fields and meatpacking plants in rural regions. Their presence is transforming race relations, local governments, and the built-environments of these communities, often triggering right-wing nativist political agendas. Racism and populism have intertwined in particularly virulent strains of xenophobia in the U.S. and have metastasized into powerful political forces. Indeed, fascist and racist movements are often connected, as vibrant pro-migrant mobilizations have emerged in response.

The momentous shifts in global migrations involve both humans and other species moving across continents or hemispheres, which in turn impact the communities that depend on these environments. Environmental justice is a cornerstone of both racial justice and migrant rights. For example, the erection of dams, roads, walls, fences, pipelines, or new land-uses can have profound ecological and social consequences, as Hurricane Katrina, Standing Rock, and recent wildfires in the American West exemplify. Attempts to protect pristine habitats must also grapple with the rights of indigenous groups to preserve their territories and lifeworlds. As climate change reshapes habitable spaces, coastal cities often become vulnerable, leading to massive upheaval and new migrations. Additionally, disease and the flow of pathogens (e.g., COVID-19, Ebola, MERS) is a crucial issue that is often weaponized as a justification for migrant restriction and surveillance and a tool of dispossession and resource extraction.

Trafficking, Displacement, and the Right to Stay Home

Untenable conditions at “home” can generate streams of forced migration, whether due to geopolitical unrest, environmental degradation, or resource scarcity. With the exception of the privileged cosmopolitans, most migrants opt to leave their home when staying put becomes untenable. Governments often create arbitrary categories to legitimize humanitarian relief rationing, and their state-sanctioned expulsions are symptomatic of broader societal dislocations. Unscrupulous actors often facilitate these movements (sometimes at the willing request of migrants with few alternatives), and exploitative labor relations are poorly regulated (often especially precarious for women and children). Co-ethnic relations can sometimes insulate and protect but very often also breed further precarity via exploitative social networks. Our research program links the struggles of international and internal migrants, such as indigenous persons, who have been robbed of the right to stay home.

In 2020, we supported fourteen faculty-led projects with approximately $550,000. Through innovative, multispecies, and interdisciplinary approaches, these projects cultivated dialogue on key migrations issues.