In the early 1990s, Steven A. Osofsky was a young wildlife veterinarian recently graduated from Cornell University and headed for southern Africa. One of the first things he noticed when he got there were the thousands of miles of fences covering the land. They were there to keep domestic beef cattle separated from wild buffalo because buffalo carry the virus for foot-and-mouth disease (FMD), which can sicken cattle and cause trade embargoes on beef from affected countries.

The fences also cut across the ancient migratory routes of the region’s historically vast ungulate herds, with devastating consequences.

“Hundreds of thousands, if not millions, of animals have died along these fences since the 1950s because they couldn’t get access to seasonal grazing and fresh water,” Osofsky says. There was intense conflict between the livestock and wildlife sectors, and as Botswana’s first official wildlife veterinarian, he saw it firsthand.

“Botswana is one of the last great places on earth for free-ranging wildlife,” says Osofsky, who now is a wildlife health and health policy professor at Cornell. “But fences are a barrier to the habitat connectivity these species evolved with over millennia, and they’ve significantly impacted the region’s wildlife. I’ve spent a lot of time since the 1990s thinking about this land-use conundrum, wherein two sectors have been seen as impacting each other in such dramatically negative ways.”

The One Health Strategy

Osofsky’s concerns for wildlife and human wellbeing drove him to help catalyze an approach called One Health. “This is the overriding theme of most of my work,” he says. “My focus is very much on wildlife conservation and the ways in which we can be better stewards of the environment and how that relates back to the health of wildlife, domestic animals, and people.”

The One Health approach led to Osofsky facilitating dialogue with southern African governments, international donors, the World Organization for Animal Health (OIE), the Food and Agriculture Organization of the United Nations, small farmers and farming communities, and others with a stake in the clash between the needs of wildlife and those of beef farmers in the region. He and his team worked with colleagues in the Southern African Development Community to identify the crux of the problem.

The international rules regarding the management of animal diseases were based on geography. The OIE’s regulatory framework had long required any aspiring beef-exporting country or region where FMD was present in wildlife to physically separate wildlife from livestock. This led governments in southern Africa to erect extensive fences.

With today’s scientific understanding and sophisticated food safety protocols, Osofsky and his colleagues concluded that the OIE’s goals could be equally well served by focusing on the beef production process. Osofsky says, “Whether you’re talking about E. coli or FMD or a parasite, how you deal with the product from a biosafety viewpoint is what you really need to worry about.”

Osofsky continues, “You can process meat, vegetables, or any food by using standardized approaches based on good science, farm to fork, as they say, to make sure the end products are safe for human consumption, while at the same time ensuring that a product like beef doesn’t spread an animal disease. It took many years of dialogue before the OIE acknowledged that what is essentially a food safety approach is equivalent to the geographic, fence-based approach.” In 2015 the OIE’s World Animal Health Assembly updated OIE guidelines so that fences were no longer the only option for managing FMD in southern Africa.

“Fences are a barrier to the habitat connectivity these species evolved with over millennia.”

As Osofsky worked on the fence problem in southern Africa as well as other environmental and wildlife conservation issues, he was able to utilize health concerns to gain policy traction. Eventually, he brought together a diverse array of colleagues to help develop a new field subsequently dubbed Planetary Health by The Rockefeller Foundation.

“Planetary Health is about improving both our understanding of the public health impacts of anthropogenic environmental change and our ability to measure them,” he says. “This can then improve decision making in the realms of land-use planning, ocean-use planning, environmental conservation, and public health policy. If governments want to dam the Amazon River’s tributaries for hydroelectric energy, for example, but project assessments neglect to look at the millions of people who depend on migratory fish in that freshwater basin for protein and micronutrient nutrition, then we could be missing one of the largest real costs resulting from the dams. Many infrastructure projects have both positive and negative public health impacts. If we do a more thorough job assessing these impacts, we should make better-informed, more sustainable decisions.”

In 2016 Osofsky came full circle and joined the faculty of Cornell’s College of Veterinary Medicine. He brought with him a vision of the college as a leader in wildlife health. One of his first steps was to help develop a flagship program called Wildlife Health Cornell, a College of Veterinary Medicine Center of Excellence—recently renamed the Cornell Wildlife Health Center.

“The array of exciting wildlife health work underway across the veterinary college, much of it involving other parts of the university as well as external partners, creates a window of opportunity to build a real community of practice,” Osofsky says. “The Cornell Wildlife Health Center is a way to capture all of the neat things the college is doing—and can do, going forward—to make sure we share what we’re learning across campus and around the world.”

In March 2017, the College of Veterinary Medicine received a $1.7 million grant from The Rockefeller Foundation (which runs through December 2020) to support Osofsky’s work. He is also actively fundraising for 2021 and beyond, given the ongoing needs in the southern Africa program and more broadly for growing the Cornell Wildlife Health Center’s domestic and international programs.

With part of the current funding, Osofsky and team have been evaluating the potential impact that could be leveraged by combining traditional Environmental Impact Assessment of, for example, complex infrastructure projects with the concept of Health Impact Assessment. Their recommendations recently were published in the flagship journal, The Lancet Planetary Health. This work will help inform policymakers at a range of scales so that certain issues—such as the public health and wellbeing impacts of alterations to natural systems people depend on — are taken into account more proactively.

“A successful outcome for both the livestock and wildlife sectors could be a real boost for transfrontier conservation and the sustainable development it is meant to engender.”

The other portion of the grant—as well as additional funding from the Academic Venture Fund at Cornell’s Atkinson Center for a Sustainable Future—has been assisting local beef farmers living with wildlife in southern Africa. The grant is being used to help them undertake the next steps toward being able to sell their beef on the world market while supporting the enabling environment needed for official reevaluation of some of the fences impacting key wildlife migration corridors. Given the new land-use opportunities that improved FMD risk management represents, in 2019 the government of Botswana restarted what is called the National Committee on Cordon Fences, a high-level multi-agency effort that had been abandoned more than 20 years ago. The rejuvenated committee is charged with advising on wildlife-friendly fencing options and alternatives to fences, as well as on the management of transboundary wildlife, including the need for migratory corridors.

“This action is a huge milestone,” Osofsky says, “one that reinforces Botswana’s regional leadership in integrating conservation and development.”

Osofsky's focus is on the Kavango Zambezi (KAZA) Transfrontier Conservation Area, a conservation and development initiative that spans five countries — Botswana, Namibia, Angola, Zambia, and Zimbabwe. KAZA’s wilderness is a global treasure and is home to more than half of all remaining African elephants, and many other endangered and threatened species.

Osofsky says countries like Botswana want to move the new approach to beef production forward. They have welcomed Cornell’s technical support. He and his team of Cornell and regional experts have been together in southern Africa frequently to help progress key technical steps that Botswana needs to take to ensure FMD-free beef can be successfully produced and marketed from the northern part of the country, where buffalo are the natural reservoir of FMD viruses. Botswana’s Department of Veterinary Services has welcomed the guidance, and the new president of Botswana even discussed the importance of this “commodity-based trade of beef” (CBT) approach in his first State of the Nation address at the end of 2018.

Beyond Botswana, Osofsky’s team was asked by the official KAZA Secretariat to help bring the livestock and wildlife veterinarians of all five KAZA countries together to discuss CBT and other issues related to transboundary disease management and conservation. The new KAZA Animal Health Working Group has now been convened several times with Cornell’s technical assistance, most recently in Victoria Falls, Zimbabwe in June 2019.

“My staff lead Shirley Atkinson and I feel deeply honored to have been invited to facilitate the important cross-sectoral work of this international body,” Osofsky says.

Osofsky is seeing evidence, on the ground and in the policy arena, that this new approach to beef-trade disease risk management is truly taking hold.

In June 2019, the Southern African Development Community (SADC) Council of Ministers formally adopted as an official SADC document his team’s Guidelines on Commodity-Based Trade Approaches for Managing Foot-and-Mouth Disease Risk in Beef in Southern Africa. The Ministers are urging SADC Member States to implement the guidelines, which will improve the livestock sector’s access to markets while facilitating land-use planning that has the potential to address conflicts at the livestock/wildlife interface that have been unresolved for the past 70 years.

With all of this work having led to a new way to manage FMD risk in southern Africa, the most problematic veterinary fences, Osofsky explains, potentially can be realigned or taken down, allowing the historic migrations to return. A successful outcome for both the livestock and wildlife sectors could be a real boost for transfrontier conservation and the sustainable development it is meant to engender.

“There was an old fence line in Botswana that got opened up a few years ago,” Osofsky says. “There were no living zebras that had ever made their ancestral migration across the region. And yet, as soon as the fence was no longer a barrier, the migration was restored. The zebras followed the same route used by previous generations. That tells me it’s not too late.”

Updated and edited by Jeri Wall, from the original story “Cattle, Conservation, and Collaboration” by Jackie Swift, published by Cornell Research 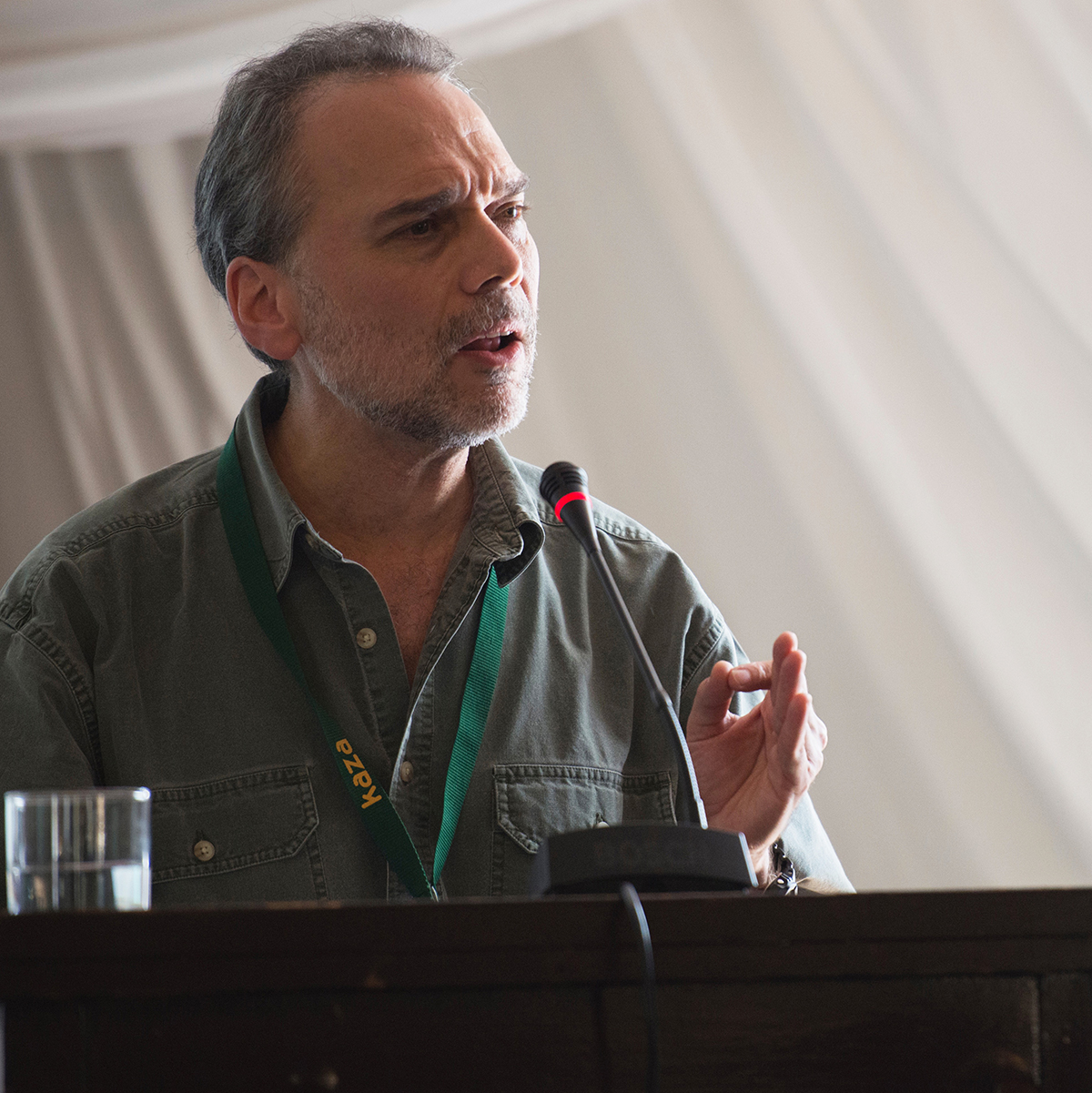 Steven A. Osofsky (DVM, Cornell University) is the Jay Hyman Professor of Wildlife Health and Health Policy at the College of Veterinary Medicine at Cornell. He is a faculty fellow at Cornell’s Atkinson Center for a Sustainable Future and a faculty associate at the Institute for African Development in the Mario Einaudi Center for International Studies. He is a member of six Cornell graduate fields: zoology and wildlife conservation, natural resources, regional science, global development, public affairs, ecology, and evolutionary biology. He is also a member of the Migrations Taskforce.

Osofsky is a prolific author of peer-reviewed journal articles and an expert spokesperson on conservation and health-related issues. Several highlights: